We all knead flour at home to make rotis or chappatis. It seems like such a routine activity that we dont consider it to be a chemical reaction anymore. We have noticed before that when dough is kneaded too long it becomes elastic, we always rest the dough for sometime before using it, why do we follow these steps ?

Here is an attempt to answer these questions. We start with a simple dough that is made by kneading wheat flour with water and go on to understand how yeast acts on dough to give us the delicious bread we eat everyday.

When flour is mixed with water the proteins present in flour – Glutenin & Gliadin, grab water and each other to form an elastic mass of molecules called ‘Gluten’.

The more you knead the dough stronger the gluten bonds become.

Let the dough rest for sometime before making bread or

rolling it out into rotis/chappati

When the dough is allowed to rest the gluten bonds relax

making it easier to give shape to the dough.

Leavening is the process of adding gas to a dough before baking to produce a bread that is light and easy to chew. 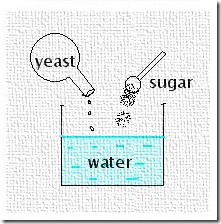 Stir yeast with sugar in warm water until it

Yeast cells feed on sugar and get activated.

Warm water is used because optimal temperature for yeast to ferment sugar is 32  ° C.

Warm milk can also be used instead of water to dissolve yeast.

throughout the dough hence strengthening the

The more the dough is worked upon, the chewier the end product will be. This would be desirable for bakes like bagels, pizza crust or French bread.

Bread that has not been kneaded enough tends to be crumbly and falls apart easily due to weak gluten bonds. 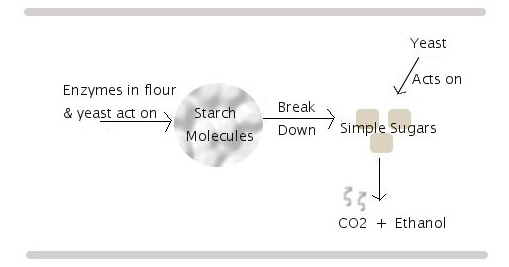 The by-product ‘Ethanol’ is an alcohol that contributes to the bread’s flavor.

The dough is now allowed to rest. In about an hours time it doubles up in volume.

If the dough has a strong gluten network the produced CO2 is trapped in the dough in the form of tiny bubbles and the dough begins to inflate.

Punching down the dough releases the large

CO2 bubbles. If the gas is not allowed to

escape you will end up with yeasty flavored

Now allow it to rest for a short while so that the gluten bonds relax and it will be easier to shape the bread.

Give the desired shape to the dough and

let it rest for a short while till it puffs up.

This is to complete any yeast activity

before the dough goes into the oven.

Once in the oven, yeast will become

The enzymes in the flour that were assisting the break down of starch also become inactive now.

Once the bread is done you can tap the bottom of the bread can. If it sounds hollow the bread is ready, else it needs to be baked further.

Certain breads appear more brown on baking than others. There are a couple of reasons behind that :

1) Wheat flour breads are naturally browner than breads made with white flour.

2) If milk was used in the dough you will get a browner bread. Milk contains lactose, a sugar that yeast can not act on. Hence, lactose is available for browning. The color change starts when its heated to about 175 °C.

Dough that doesn’t contain milk can be refrigerated up to 3 days. However, if it has milk then its shelf life is reduced to 2 days.

There is another case of bread making where you intentionally refrigerate the dough and bake it later as the bread seems to have a better flavor this way.

The reason behind this change of taste is that at low temperatures bacteria begins to act on the dough. Yeast does not die at low temperatures, rather its activity reduces giving bacteria a chance to feed on the sugar and produce flavorful acids. This process of bread making is also known as ‘Cool Rise’.

If the dough is stored for too long the CO2 released by slow yeast action, along with the acids produced by bacteria will cause the dough to turn sour.

What makes a birthday so special? The cake? The party? Or just the presence of those special people in your life that light up the rest of your year?

See how Jujep’s friends surprised him by baking a deep dark chocolate cake for his birthday. You can find the recipe hidden in the story.

To know how this cake actually looks once its done and to read the traditional recipe please follow the link. For those who would rather join the birthday celebrations, get cracking on a present you can make for Jujeps!

( Mozilla Firefox is currently not displaying images, so to view these sketches please switch to Google Chrome or Internet Explorer ) 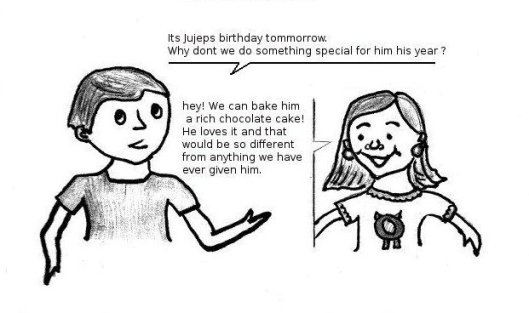 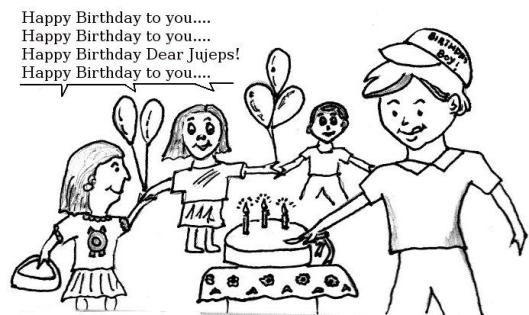 Here is what I drew for the ‘tailing the donkey’ game for a friends Birthday bash. I know, it looks like it has rickets.

Its a typical party game where a kid is blind folded and given a marker. He is then left to draw the tail of the donkey. Once he is done, his name is written wherever he drew the tail. Of course, the guy who gets closest is the winner.

You can check out this site for a good step-by-step tutorial on how to draw a donkey. I just drew free hand, err… actually my hand was not totally free. It was tough to rescue this donkey from my baby doll.

Ok, running out now. Getting late for the party.

A Donkey with Many Tails – Art by Kids of Brindavan 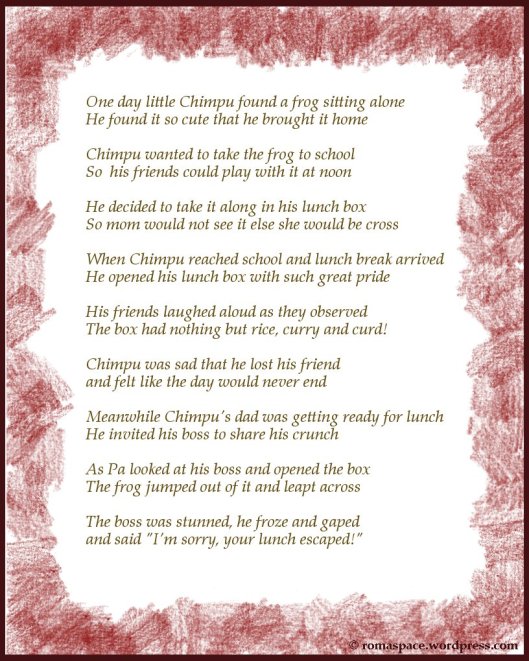 This is my entry to the Lunch Pack Disasters Event hosted by Lakshmi of Taste of Mysore. Thanks so much Lakshmi for coming up with this interesting topic.

It was a bright summer day when Mr.Mango Moody asked Ms.Mango Masti if she would like to marry him. Masti was ready but her father Mr.Dusheri did not consent as Moody was a Begampalli and Dusheris were sweeter.

Papa Dusheri said “Why do you want to marry that big, fat Begampalli. He is not as sweet as us Dusheris”. Masti’s eyes welled up and Papa Dusheris was sad.

For months together Moody and Masti tried to convince him. Finally Papa Dusheri consented and the Dusheri-Begampalli families got busy with the wedding preparations. The insane shopping started. Mr.Moody didnt like Ms.Masti’s extravagance. Towards the end of their shopping spree Masti wanted to buy a red, zari saree for the wedding and Moody rejected it as it was exhorbitant. Poor masti accepted his wish and left .

One day before the wedding Moody got Masti a present. Masti could not contain herself. It was the same saree she had left at the saree store the other day! Masti thanked Moody and said she would remember that day forever.

Finally the BIG day came. Lots of little green mangoes danced at their wedding. As you can see in the picture, Masti looks gorgeous and Moody looks so happy. May they live happily ever after.

Please bless the couple. Blessings in cash only. Ohh sorry, presents in blessings only!

This picture is my entry to Mango Mantram, the food art event hosted by Indira of Mahanandi. Thanks for hosting this unique event. It was a welcome change to think beyond recipes. 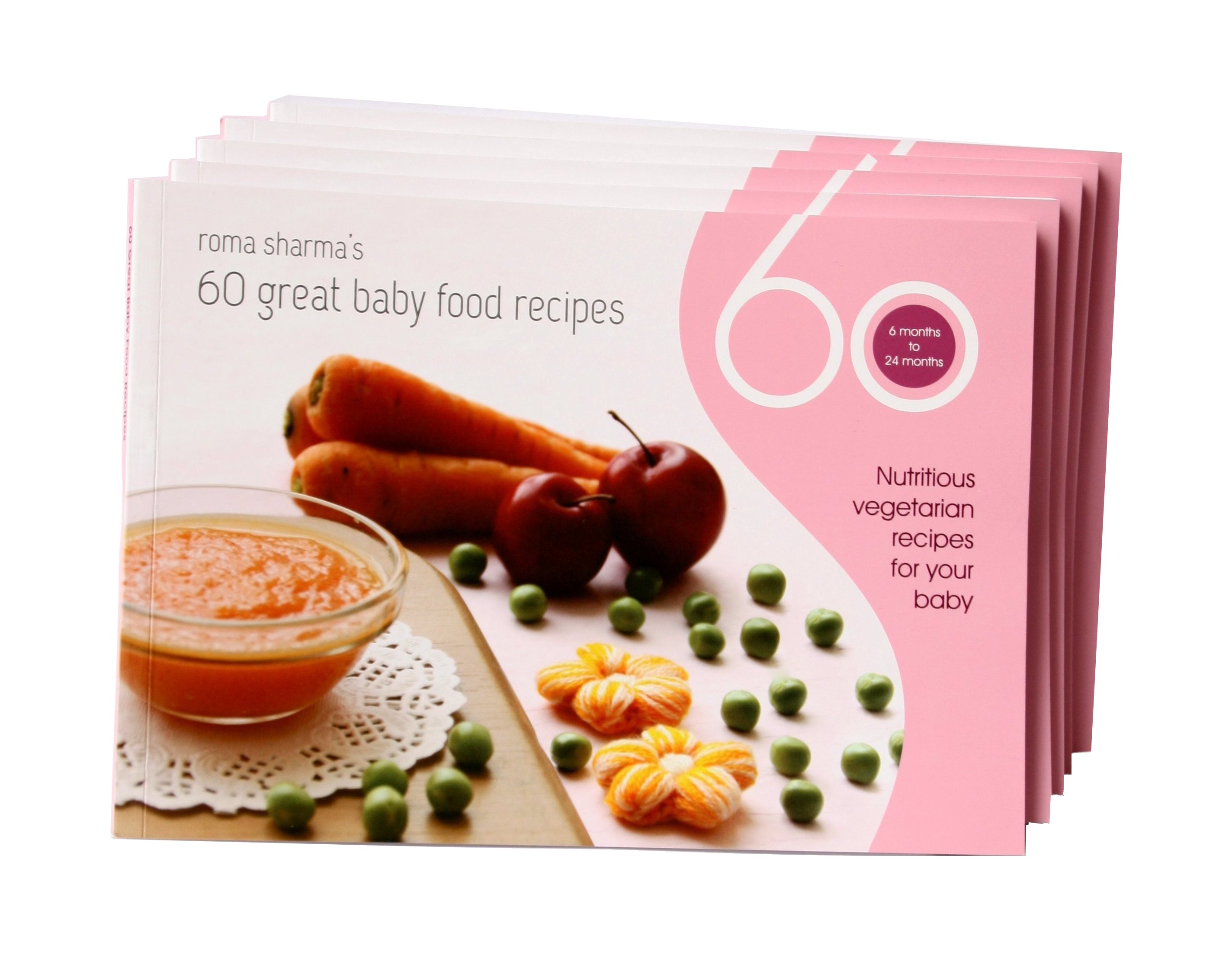